I have written very little in the past, what, month? Year? Not quite, but it's been a while. Dega has left my mind almost entirely, so the title of my webpage is rather outdated, especially since it remains "dago" (I hope I have not mistakenly offended anyone with such a name). Fulludhét has received very little work, my world has received very little work; even so, I have still been making languages.
The other day I was just thinking on a more conworldy aspect of conlanging. One that unfortunately takes quite a bit of the fun out of constructing languages. That is reality. And while it may reduce the understandability of a conlang, and perhaps the availability to a human (which I assume we all are) it can be very interesting to think about what a truly alien language might look like, and what the differences could be between the alien beings and our native Earthlings, and--more to the point--how those differences could affect the languages which the alien beings speak.
Perhaps my inspiration for writing this was watching Star Trek (yeah, I'm a nerd in more than one way) where the aliens just all start to look the same; maybe one's ridge on their forehead is a couple of centimeters taller than the other's, and its skin color is a slightly darker hue of violet, but they're all just humans in disguise. And while this is of course greatly due to the budget constraints that make Star Trek great (remote controls that shoot laser beams, beautiful grassy, Earth landscapes a million light-years away from Earth, the list goes on), I see it elsewhere too, and I want to see more interesting beings, with something better than six fingers on each hand or four arms (two things I am both guilty of), I want to see beings with strange brains, or something in replacement of a brain, and different physical characteristics, even if their vocal apparati (apparatuses?) remain unchanged for the sake of our beloved languages.
Perhaps I want to see this happen even if I doubt it will, but perhaps I don't want to; how many alien beings can you fit in a human body? But I digress...

The purpose of life is living; ultimately it comes down to that. One could say the purpose is to consume food, but that is so that we can have energy to live. One could say the purpose is to reproduce, but that is only so that later generations can live. One could say that it is to progress, whether technologically or genetically, but that eventually comes down to an easier, more efficient way to... you got it... live. Communication is a feature of many forms of life on Earth that allows an organism to notify another organism of something important to its survival, or another's survival. Language is a form of communication that allows a speaker to send complex information about complex topics to a receiver, and vice versa. This also helps the survival of the receiver, the sender, or even the community to live.
An alien life-form may (and in all likelihood does) have very different needs for survival, so their language--if it exists (let's assume it does)--will carry very different meanings or uses depending on the structure of the life-form, the environment from which the life-form originates, and the needs which the life-form has in order to survive.
Following are a number of aspects of language that will certainly vary between various life-forms:
1       If senses (and thus experiences) are different, or their importance or clarity is different between life-forms, then their emphasis or even existence in any language will be different as well.
2      If the body or life-form’s structure requires different materials to survive, these will have greater importance in the language, influencing some aspects of the language (metaphors?).
3       If the body or life-form’s structure is different than ours, then the mode of communication may (and probably will be) different as well. It may use scent, visual, tactile [whether electromagnetic contact (touch), or temperature], perhaps something with pheromones (like ants and bees), or something else entirely.
4       Another life-form may think and speak absolutely in contrast to our relative tendencies (there's some nasty ambiguity... I'll try it again. Another life-form may think and speak in an absolute manner opposed to our tendency to think and speak in a relative manner). There could also be absolute, single value measurements opposed to our ranges and comparisons. (This one seems very unlikely to me, but I suppose that is my point.)
5       Language could be structured differently than our use of nouns and verbs for actors and actions respectively. We have a level of productivity with which there is nothing to be compared, but another life-form's languages may have a greater or lesser level of productivity with which probably comes more or fewer parts of speech respectively. That is a language with lesser productivity may have words that have far longer and more complex meanings, perhaps entire sentences or clauses. Of course, some languages here on earth are like this, but that is typically a morphological thing rather than a single very unproductive word. I am sorry if I am using the term productivity incorrectly here, but I think it is what I intend.
6       Depending on the mode of communication, languages may evolve and split in many different ways and at faster and slower rates than does ours.

In fĺuðét questions and negations are shown with one suffix, and a couple of modifications of it. Below are the most irregular words and the most regular word.
Not all of the question words are listed above, this is because fĺuðét does not have special words for those, but instead uses “which”. “Which” can be attached to a number of different things to show different types of questions, and negations. The forms ji and ju ds not do all of the work though; they have two other forms used for negation shown in the table below.
The “statement” column is mostly for negation. The “question” column is used to ask questions. A question with -ju would be “is it not?” (There should be no expecting the affirmative that there is in English though), and a question with -ji is just “is it?”. ði and ðu can also be used as “yes” and “no” respectively. To make questions with “where?”, “how?” and “which cow?” one must use -ji and -ju and attach them to the noun that they are asking about, so “where?” would be ślot “place” + -ji or śloji; “how” can mean various different things, but for the “how” that means “by what means?” or “in what way?” one would use fĺtéþ “method” + -ji or fĺtéði; “which cow?” would be pédli “cow” + -ji or pédliji. Of course in any of these words -ji can be replaced with -ju to make it a negative question.
Another aspect of questions and negation is that multiple parts of speech can be questioned and negated simultaneously. So this also leads to the fact that if anything can be negated, then some things probably need to be negated. What I mean by this is if you’re trying to say “The cow did not want to eat the grass” where there is emphasis on the point that it’s the grass that the cow does not want to eat, then you would negate the “grass”, but you’re also saying that the cow didn’t want to do the verb (“eat” in this case) either, so you have to negate it too; it is essentially a double negative. A multi-question (if you will) is where you’re asking about two or more things at once. It’s like the English: “Who did what?”, except it is more widely accepted and used.
Almost any word can be negated, or asked about. For most things (i.e. nouns, adjectives, adverbs [other than tense]) the appropriate suffix is merely attached to the end of the subject in question (no pun intended), but for verbs the suffix is isolated and placed immediately after the tense marking.
DUNTA
I have begun work on the “first language” of Dunta. I put “first language” in quotes, because the language probably has a couple hundred years worth of predecessors, but this is the first, fully fledged language with a complex grammar. It is almost entirely isolating, and most of the grammatical words are still used as a more concrete form elsewhere. A simple sentence can only be intransitive; to make it the equivalent of transitive sentence, one must add another clause with the same verb as the first clause in the passive voice with the object as the subject. So, to say “I eat the cow” one would have to say something like “I eat; the cow is eaten”. I made it this way, because it seems like the first language’s predecessors would not express anything, but simple intransitive sentences, and this would be the logical step towards transitivity. I think the passive voice in this language will be a simpler form than in English, but I have just started this language and have not worked everything out yet.
I would love any input on what you think a first (or almost first) language would look like in its phonology, its morphology, and I’m very curious what you think the word order should be (at this point I’ve decided SAOP [where A=Active of verb, and P=Passive of verb], but if you have a convincing argument otherwise I would love to hear it.
Posted by Koda at 5:19 PM No comments: 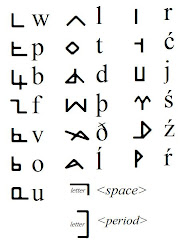